The odds are stacked against Professor Noel Fitzpatrick and his team when Murphy, a Golden Retriever puppy, is rushed in by his devastated family. A severe dog attack has left Murphy with horrific facial injuries. His jaw bone is hanging off and his life hangs in the balance. Waiting was not an option, and Noel and the team have to go into surgery immediately on a Sunday night. Using a scaffolding of precariously placed wires, Noel attempts to reconstruct Murphy’s fragile broken jaw, and attaches an external metal frame to hold it all together, but the soft bones and high risk of infection make it far from easy. 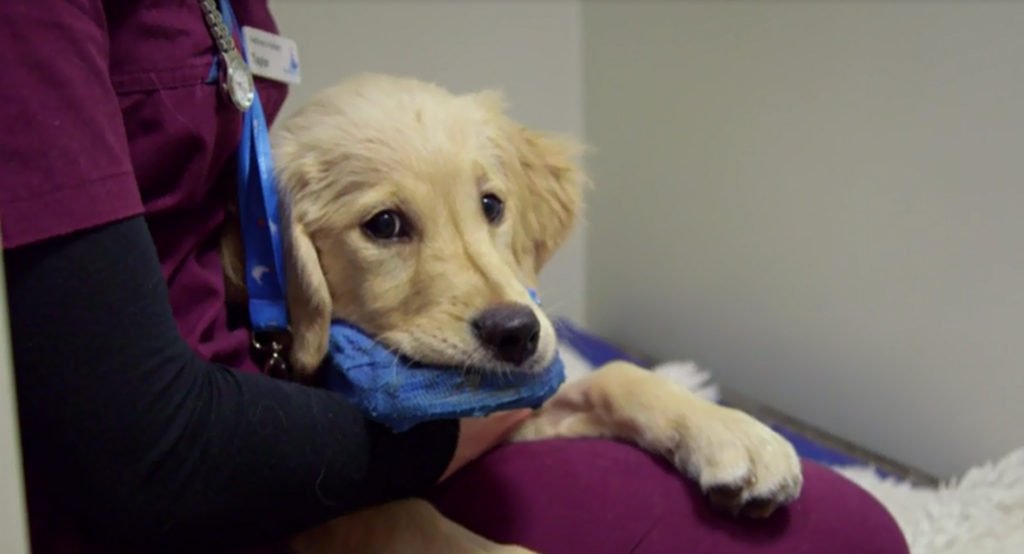 Murphy in a kennel at Fitzpatrick Referrals

Murphy is rushed in a blanket to Fitzpatrick Referrals as an acute emergency on a Sunday night following a terrifying attack by another dog in the park.  He wasn’t even three months old. Most of his lower jaw (mandible) had been ripped downwards, resulting in profuse bleeding and extensive tissue damage which was literally hanging on by a thread of blood and nerve. This posed a very significant surgical challenge for Noel and the team. The situation was intense. Tim, Murphy’s dad was devastated and feared the worst for his best friend; Noel and his team were exhausted after a long weekend on call. Noel himself was having a particularly emotionally challenging day, but a decision had to be made – Murphy would have to be put to sleep or immediate late night surgery was the only option to save his life. It was the perfect and the most imperfect storm.

Murphy was rushed to the advanced imaging suite where the CT scans further revealed the challenge ahead. The surgery would need to go ahead immediately if there was a chance of reconstructing Murphy’s jaw and Noel had to be open with Tim about what was at stake. There was a real chance that repair would be impossible or that the attempt would fail and Murphy would have to be put to sleep anyway. There were massive risks. The bone was wafer thin, and the tiny pieces were barely hanging on to their blood supply. The teeth of the attacking dog had injected bacteria into the tissues and infection was a massive risk. After a very tearful exchange, with emotions running high for both Noel and Tim, neither could bear to say goodbye to Murphy without trying. The stakes were high but they decided to try and save him whilst there was still a chance. But time was not on their side – waiting until Monday just wasn’t an option because the blood vessels were just barely hanging on and Murphy was still bleeding profusely and in a lot of pain. Equally, neither wanted to put him through surgery that might fail – but there was no option other than euthanasia. Following Tim’s heart-rending decision, Murphy was rushed to emergency surgery near midnight leaving Noel to find a way to realign all the broken pieces of Murphy’s jaw.

The only reasonable way to reconstruct the tiny fragile pieces of bone was to suspend them on thin wires and link those wires on a scaffolding like a suspension bridge. Putting screws and plates in the fragile pieces just wasn’t an option, especially with the tenuous blood supply. Also the bone of Murphy’s mandible was very soft in comparison to his teeth making the placement of wires fraught with risk.  Noel worked fastidiously to reconstruct Murphy’s mandible using thinner wires for the smaller fragments and thicker wires to align the major components whilst protecting the blood and nerve supply. Once everything was back in alignment and precariously held in position with the tiny wires, all wires were connected to a special rigid U-shaped external fixation frame made out of light-weight aluminium to hold the wires in place and correctly align his lower jaw with his upper jaw. 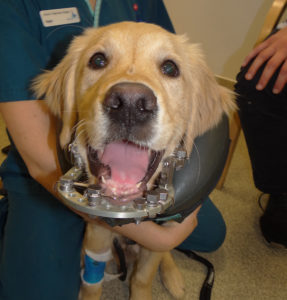 Murphy with the external frame holding the pins and wires together 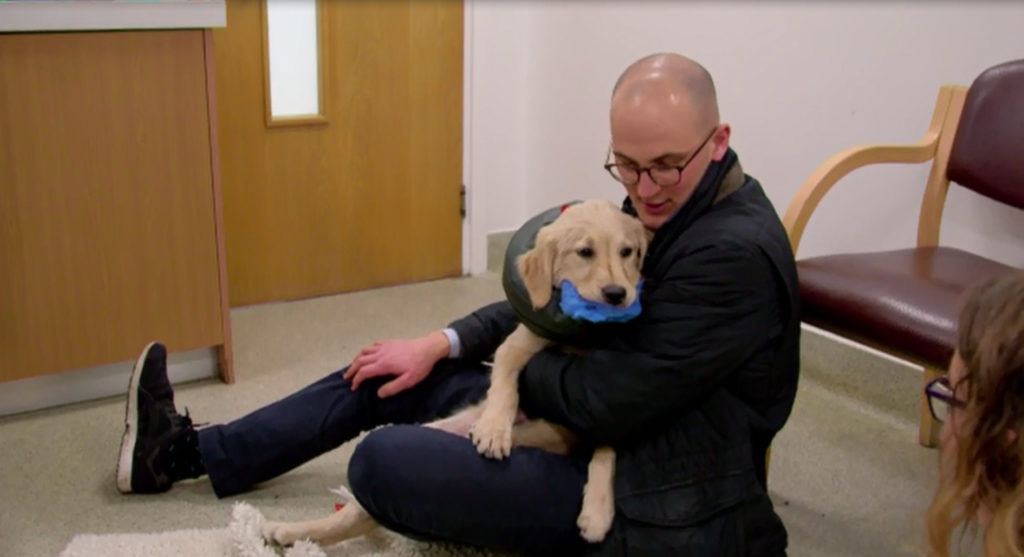 Tim visiting Murphy at the practice

Finally, the day came when the frame could finally be removed, and it was smiles all round from the team, from his family and especially from a waggy Murphy! We are all so very happy for Murphy and hopefully he will now go on to live a long, happy and full life.  For all the team at Fitzpatrick’s, it has been an honour to help this lovely family.

Murphy is one of my favourite patients of my entire career. He came into my life as a little ray of hope in a world which was very dark for me that particular day. Dogs have given me far more than I have ever given them. I will remember Murphy forever. He will hopefully live a long and happy life of joy with Tim and his family. Yet that light could so easily have been turned out. That decision was down to Tim and I in one of the most tearful and saddest moments of our lives because of what we were both going through that fateful day. Murphy reminds us all that no matter how bad things may seem, there is always hope, and he shows us that no matter how dark you feel inside, looking after each other and looking after love, giving a little bit of extra effort to look after that love, is the only thing that will see us through at the end of the day.