Cats have nine lives so they say, but few felines can have had a luckier escape from the jaws of death than Oscar, whose rear paws were chopped off by a combine harvester while he was basking in the sunshine, only to have them replaced through a bioengineering miracle in 2009.

In a three-hour operation, the veterinary surgical team had to insert the amputation prosthesis by drilling into one of the ankle bones in each of the back legs – an extremely delicate feat, which could have fractured the ankle joint before the procedure had even begun, and even more challenging had to be performed twice. These artificial implants which are attached to the bone at an amputation site are coated with hydroxyapatite, which encourages bone cells to grow onto the metal. The skin then grows over the special umbrella at the end of the implant to form a resilient seal against bacteria and potentially fatal infections.

Oscar’s lucky break began when his local vet Peter Howarth from St Saviour in Jersey referred his owners Kate and Mike Nolan who live in the Channel Isles, to the clinic in Surrey, following the accident in October 2009. Roll the clock forward to 2013 and Oscar was once again referred to the clinic because one of his amputation prosthesis had snapped!

Oscar after his first surgery.

Given the fact that Oscar was a world first, we were unable to predict this complication. Oscar had lived three active years after his initial surgery and given how well he coped we decided that we should give Oscar a chance and try and repair his snapped prosthesis. Oscar was booked in for surgery and during a 2-hour procedure, we revised his amputation prosthesis with a next-generation prosthesis called a PerFiTS. 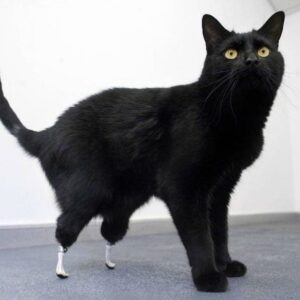 Oscar with his new amputation prostheses.

The surgery was a success and once again Oscar the Bionic Cat was running around on four legs. Oscar is a truly inspirational animal and takes every single intervention and stay in the hospital in his stride! Oscar is a much-loved patient when he visits the clinic and it is only through the work of every single member of the team that we can nurse and rehabilitate patients like Oscar through their surgery.