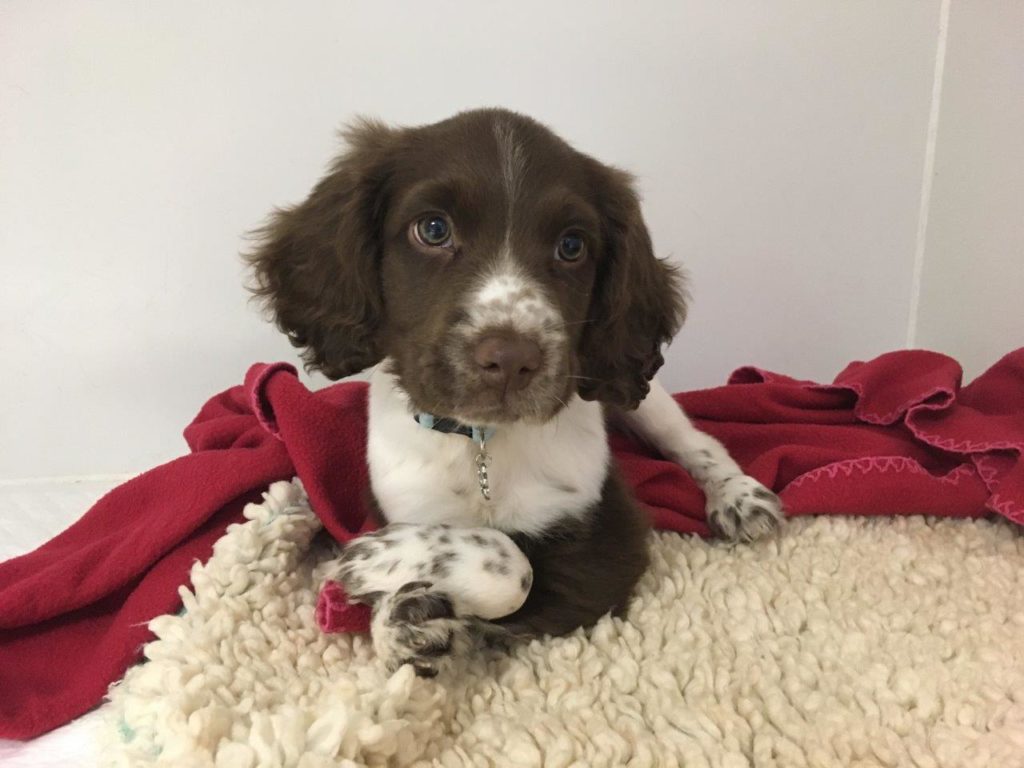 Family: Poppy lives with her adoring family, Jo, her father Chuck, her husband Dean and her step children and other animals.

Her Story: Poppy was found alone abandoned in a garden by Jo, who noticed immediately the severity of her deformed front legs. A visit to their local vet told them that Poppy had dislocated elbows, with her bones twisted and out of place. Like Poppy, Jo also has trouble walking.  She suffers from chronic pain following an accident at work six years ago. Jo is determined to help Poppy as well.  They didn’t know whether it was possible for Poppy to live a full life, but they wanted to give her the chance to walk and live a full a life as possible.

Treatment: When Noel met Poppy he examined her and the x-ray imaging of her legs and explained that she had a congenital elbow dislocation. The solution for Poppy was not straightforward, and Noel explained that there was no guarantee he would be successful if he attempted to give Poppy some function with her front legs. A lot of people would say it would be kinder to put her to sleep, but Jo and the family wanted to try and give the lively happy puppy a chance.

If she’s not going to be in that pain, I can cope with her being disabled.  My dad is, I am.  She can come join the family – JO

Noel took Poppy to surgery to pull her legs into the correct position. Noel made an incision into the front and back of Poppy’s left elbow joint to release the tissue. He needed to fuse Poppy’s elbow joint solid so it would remain stable enough to support her weight. To do this, all of the cartilage on the joint surfaces needed to be removed. Noel inserted two screws to try to hold the bone together but because Poppy is so young, her bone was still very soft. Once he carefully negotiated her soft bones, Noel fitted an external frame to hold her legs in alignment whilst her bones fuse together. He repeated the procedure on her other leg. The surgery took the team over three hours. Poppy remained at the practice for a number of weeks for the team to closely monitor her progress.Three weeks later her elbows were healing well and making great progress, but Noel identified a problem with her wrists. The problem was that on one side the paw was not going over because the tendons were too loose, and on the other side, the tendon’s were too tight. Noel made a splint for Poppy to hold her wrists in the correct position.

Three weeks later her elbows were healing well and making great progress, but Noel identified a problem with her wrists. The problem was that on one side the paw was not going over because the tendons were too loose, and on the other side, the tendon’s were too tight. Noel made a splint for Poppy to hold her wrists in the correct position.

Outcome: Seven months later, Poppy had her frames removed and back at home in Cheshire, having weekly hydrotherapy sessions to try to improve the strength in her wrists. She had made remarkable progress. Noel decided for the time being it was best to not operate on Poppy’s wrists as she was doing so well!

Poppy is now unrecognisable from the puppy found abandoned in the garden. Not once did she ever lose her spirit, just like her family never lost hope. Now she runs, she bounces, she plays and loves her life.

Find out more about Fitzpatrick Referrals Orthopaedics and Neurology Centre