There’s an emergency admission at Fitzpatrick Referrals when nine-month-old Jack Russell puppy Bella is rushed in suffering from a crushed pelvis after a freak accident when she fell from a carrier on dad Peter’s bike. The serious fracture can’t be left without surgery but Bella will need time to stabilise before any intervention is attempted – and guilt-ridden Peter is still in shock. “That’s my abiding memory at the moment, a dog in pain, caused by me running her over,” he says. “It was awful. I just looked down and there she was, going straight over the wheel. I’ve been reliving it over and over again.”

Daddy’s girl Bella lives with her doting family and is often found accompanying her dad Peter on bike rides.

Bella suffered a crush to the pelvis after jumping out of the basket on Peter’s bicycle. He rushed her straight to an emergency vet who took an x-ray of her spine and immediately referred her to Professor Noel Fitzpatrick and his team. After examining the x-ray, Noel realised just how severe the injury was. Bella had sustained five fractures to her pelvis – two of which would certainly require surgery. The left side of her pelvis had become displaced inwards and surgery was the only option to save her life. He stabilised her with painkillers that evening and decided to operate the next day.

Noel repaired Bella’s pelvic fractures by carefully fixing a metal plate to the left wing of her pelvis. He fixed this into place with pins – allowing the bone to be positioned back into alignment. Correct positioning was crucial to ensuring that the fractured segments lined up. If the plate was a fraction out of place, the pelvis would not heal. He then hoped that the remaining fractures would be held securely enough to cure themselves with callous. During surgery, Noel decided to add a second plate to ensure the fractures were completely stable. He expected this to allow her to be up and walking again in a matter of days, and fully healed within a month. Bella would be back in the bicycle basket in no time – with the added addition of a safety belt!

Seven weeks after the operation, Bella and the family returned for a final check-up but were worried that she wasn’t healing, as she was struggling to put pressure on her left leg. After careful examination, Noel explained that this was simply a case of her damaged muscle repairing and that a course of physiotherapy would heal this. A final x-ray backed his suspicions – Bella was making great progress. Before they returned home, Noel offered some final words of wisdom, "don’t put all of your dogs in one basket."

She’s always loved dad the most. She’s such a daddy’s dog. She sits on his lap all the time.

Nearly three months after the operation, Bella was back to being a puppy again and ready to get back on the saddle for their seafront cycle rides. Whilst she had clearly forgotten all about the accident, poor dad Peter was still crushed by the thought of it. Determined to get back on the saddle with Bella, he attached a safety belt to the basket and braved the open road once again – with a very happy dog in tow. 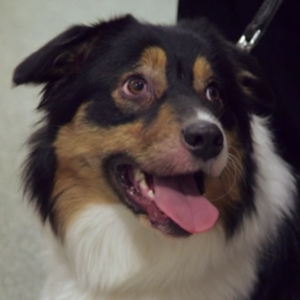 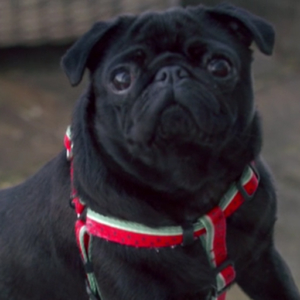