Sue and Graeme arrive at Fitzpatrick’s with bouncy Bertie, their seven-month-old fox red Labrador puppy, who despite his youth is suffering from lameness, caused by a joint defect called Osteochondritis Dissecans. Graham, an orthopaedic foot and ankle surgeon himself is all too familiar with implants for humans affected by the same condition and discusses with Noel whether this is an option for Bertie, where a custom-made 3D printed super-smooth ridge is used to fill the defect in the talus, which is the main articulating bone in Bertie's ankle joint. Graham and Sue have a tough decision. “You’re here in time, but only just” says Noel. He explains that they can give medicine and see how things go, but that in the end they may end up with a complete ankle replacement or a joint fusion on both sides.

Young Bertie lives with mum Sue and dad Graeme in Hampshire, along with his Labrador brother Ollie and the couple’s two sons James and Johnny.

Bertie became lame in his hind left leg, which his family thought might have been caused by trauma after jumping off of a table in the garden and landing awkwardly. They sought advice from their local vet who diagnosed Bertie with Osteochondritis Dissecans. Graeme, a human orthopaedic surgeon, was very familiar with the condition and didn’t want to simply ‘clean up’ the joint which wouldn’t last very long and decided to seek treatment from Professor Noel Fitzpatrick, who he believed could offer a bionic implant solution that isn’t yet available to humans.

Naturally, within seconds of meeting Noel, the pair immediately discussed the prospect of uniting human and animal medicine. Noel was surprised that Graeme was so squeamish watching Bertie being examined, ‘what the heck!’ he exclaimed. To consider resurfacing the joint, Noel needed to conduct a CT scan of his own and sent Bertie straight to imaging. ‘He’s so soppy…’ Sue joked about Graeme.

Back in Noel’s office, he explained the results of the CT scan to the couple. It was bad news – Bertie had defects on both ankles – not just his left. Whilst the left was significantly worse, the right ankle was also affected but to a lesser extent. Noel explained that there were a few options available to Bertie. Firstly, he could stay on medication until he was older and then have both ankles fused, however that would cause Bertie’s back legs to be stilted forever.

Alternatively, Noel could resurface part of his ankle joint with implants. To be facing two ankle operations at such a young age, Graeme and Sue didn’t need any time to think about the options and chose the partial resurfacing option, for which Noel would liaise with his engineers overnight. Graeme was finding it particularly hard to come to terms with the fact that he couldn’t explain to Bertie where his pain was coming from – whereas, with human patients, he could communicate easily.

After deciding to go ahead with the partial implants, Sue returned to Fitzpatrick Referrals with her son Johnny for the first of Bertie’s two operations.
The operation involved replacing the diseased part of Bertie’s ankle with a custom-made implant. Firstly, Noel accessed the joint by temporarily removing a piece of tibia bone. He then opened the ankle and prepared the diseased surface ready for the implant. Finally, he fixed the piece of ligament attached to the tibia bone back into position – securing it with special eyelet pins and wire.

A week after the operation, Sue returned with her other son James to pick up Bertie. Noel showed them the x-ray outlining Bertie’s new implant and they were pleased to see that it had been fitted successfully. It was crucial that the family kept bouncy Bertie on strict cage rest during the rehabilitation period, to ensure he would be ready for the second operation in six weeks’ time.

Back in Hampshire, Bertie was getting plenty of cage rest after his second operation. Sue and Graeme realised just how hard it was to keep a Labrador under cage rest and couldn’t bear to leave the room, as poor Bertie would start crying if they did.

Sadly, six weeks after the second operation, Graeme had started to notice that Bertie was holding up his right leg slightly. The family decided to return to Fitzpatrick Referrals to get the problem checked out. After further CT scans, Noel revealed that Graeme’s hunch was correct. Bertie’s right implant had cracked – something Noel had never seen before. Whilst his left implant was fine, the right implant had cracked before the bone had grown into it, likely caused by Bertie pivoting on it and putting more load on the implant than previous patients – again, something Noel had never seen before. He was devastated for Bertie but was determined to make it work for him.

To resolve the problem, Noel decided to make a stronger and thicker implant, and boisterous Bertie was back at the practice one week later, on his first birthday, for his third operation to remove the damaged implant and insert the new one. The operation was a success and Bertie returned to Hampshire to recover.

I’d like it very much if we had an implant that we could use in humans which is similar to the one that Bertie had. The technology is there, it could be done. It’s been done in Bertie. There are a few patients who’d benefit from that.

Bertie recovered phenomenally and was back to playing with his brother Ollie. Sue and Graeme were happy with their decision to go down the route of partial implants, rather than having his ankles fused. They gave Bertie his puppyhood back – bounding around the garden and exploring - something he would have struggled with otherwise. 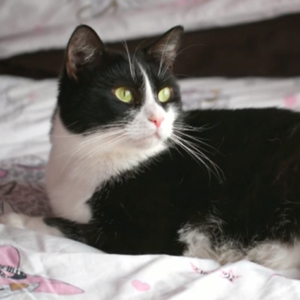 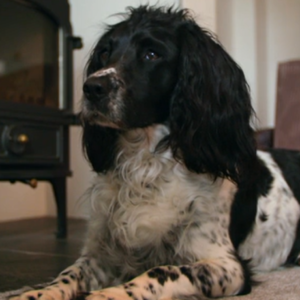