11-year-old Rhodesian Ridgeback Kwanda is admitted to Fitzpatrick Referrals Oncology and Soft Tissue centre when mum Patricia becomes increasingly concerned about a swelling bulge in Kwanda’s right eye. Initially thinking it was a sleepy eye, the swelling has begun to bother Kwanda and is reducing her eyesight significantly. Patricia turns to specialist Dr Laurent Findji who is concerned that it may be a tumour and potentially faces the prospect of removing Kwanda’s eye altogether.

Kwanda lives in Surrey with mum Patricia and her five canine siblings. Having lived with her mum since she was a new-born puppy, she’s the light of Patricia’s life.

Initially thinking she had a sleepy eye, Patricia began to notice gradual swelling in Rhodesian Ridgeback Kwanda’s right eye and sought the advice of Dr Laurent Findji – a specialist in soft tissue surgery at Fitzpatrick Referral’s Guildford centre. Laurent explained that it could just be an abscess but couldn’t rule out the suspicion of a tumour and sent Kwanda straight in for a CT scan. He immediately identified the tumour and sent off a sample to pathology to test how aggressive it was. Surgery to remove the tumour would be complex and would require total removal of the tumour to ensure that the cancer would not spread – meaning that there was a chance that Kwanda could lose her eye. Laurent couldn’t determine this until the day of surgery – only time would tell if Kwanda would have her full eyesight back.

On the day of surgery, Laurent initially removed Kwanda’s lymph nodes to send to pathology for further testing – to ensure that the cancer had not spread elsewhere.

To access the tumour, he had to remove parts of the jaw and cut into her cheekbone. Laurent was relieved to discover that the tumour wasn’t adhered to the eye – meaning that there was a greater chance that he could save it. He successfully removed the tumour but was left with a large hole in her mouth where her jaw and cheekbone were impacted. Laurent had to perform careful reconstructive surgery on her face to repair the damage. The operation ran smoothly and Kwanda was reunited with Patricia to await the further results from pathology, to see if the cancer had spread.

To have her here and see her running around with the others and know that she’s fit here again is wonderful. She’s back to her normal self.

Kwanda’s results were positive – the tumour was low grade and unlikely to spread any further. She was eventually given the all-clear from cancer and regained full sight in her eye. She was back to her old self and bounding around the garden with her brothers and sisters once again. 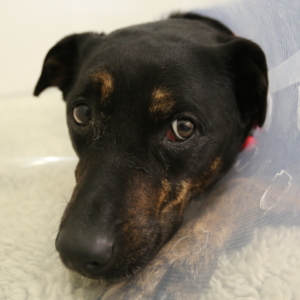 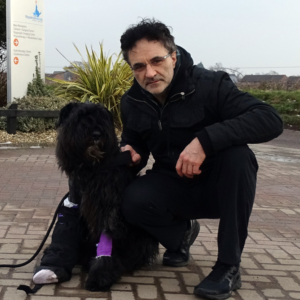