Carla and Steve make a deeply emotional visit to Fitzpatrick Referrals when they arrive with their beloved five-year-old, 70-kilo Newfoundland Tallulah, whom they’ve known since she was two days old and who’s suffering from persistent lameness of one of her front legs that has defied accurate diagnosis in the past, in spite of biopsies. This is of particular concern because Tallulah already has hip dysplasia and may not cope very well on three legs. This very special gentle giant is an emotional support dog for Carla, who suffers from dissociative identity disorder (multiple personalities) and is therefore very important for her well-being. Sadly, after examination, Noel has to deliver some potentially devastating news. “In my opinion, it’s likely to be a tumour. The dilemma we have is, we can’t get a big enough biopsy sample to definitely tell what it is without cutting it out. But if this is a primary sarcoma, the median survival time is under eleven months.” Everything hinges on the scans which Noel recommends, leaving Carla and Steve to endure another apprehensive wait before they can find out when, and if, Tallulah can be helped.

Tallulah travelled all the way to Fitzpatrick Referrals from Wakefield with Carla and Steve. She plays a vital role as an emotional support dog for Carla who suffers from dissociative identity disorder. When Carla switches, Tallulah knows how to respond to her different personalities and has given Carla the freedom to get through each day with confidence.

An anxious Carla and Steve arrived for a consultation with Professor Noel Fitzpatrick and explained that Tallulah was already suffering from hip dysplasia but had recently developed a problem with her front right leg. Noel took Tallulah for a walk to monitor her gait – combined with an examination of the imaging from her local vet, he believed it to be a tumour but couldn’t get a big enough biopsy sample to determine this and would need to cut out the tumour to do so. He strongly suspected a primary osteosarcoma (bone cancer) and broke the potentially devastating news that the average survival time is approximately 11 months. There was a stronger risk that the cancer could have already spread and that Tallulah would pass away not long after the operation. As her previous scans were undertaken a month ago, Noel decided to undertake an MRI scan to see what was happening in the humerus bone. The scan showed a lesion growing inside the marrow cavity which was almost certainly a tumour - thankfully it hadn’t yet infiltrated the soft tissues.

Noel discussed options with Carla and Steve – euthanasia was the last option they wanted to consider, so he suggested full limb amputation (which would be problematic due to her hip problems – leaving her with limited mobility) or limb salvage by removing the bone and the tumour around it and replacing it with a metal implant. The fourth option was to leave Tallulah as she is and manage her pain medically until her leg fractures. They decided to go ahead with limb salvage – returning in two weeks whilst Tallulah’s metal implant was produced.

To remove the tumour, Noel removed the humerus bone and replaced it with a custom designed 3D implant. He then fused the carpal joint solid. His biggest worry was undertaking a major operation without having the full test results diagnosing whether the tumour had spread. There was a very strong chance that Tallulah would pass away within a year but he respected Carla and Steve’s wishes to provide the best quality of life possible in the event that the diagnosis was positive.

The operation went to plan and 36 hours later, Tallulah was back on her feet – with a much-improved quality of life. Carla and Steve returned to collect her five days later but her future still remained uncertain.

Sadly the lab results confirmed Noel’s suspicions – Tallulah’s cancer was the result of osteosarcoma – for which she was receiving chemotherapy and having regular check-ups at her local vet. Three months had passed since her surgery when Carla and Steve had noticed that she was starting to lack energy again and returned to Fitzpatrick Referrals for scans and blood tests and a further examination with Noel. Whilst the implant was fine, the scans revealed that the tumour had since spread – not in the leg but sadly into her chest. Noel explained that Tallulah had a few more months left to enjoy life with Carla and Steve and advised them to let her enjoy it as much as she could.

Tallulah means the world to me. Without her, I don’t know what I’d do.

Carla and Steve had the mindset to take each day at a time with Tallulah – some days she was full of energy and others she was more stoic. Ultimately, they were happy that they could alleviate some of her pain and give her more time to enjoy the life she had left. Extra cuddles and treats were very much on the cards for Tallulah and her precious time supporting Carla was cherished each day.

Four months after her diagnosis, Tallulah sadly passed away surrounded by her loving family. Cancer can’t always be cured but Carla and Steve went out of their way to give Tallulah a pain-free life until the end. Noel and the team at Fitzpatrick Referrals were heart warmed by their determination and were touched by the special bond that Carla and Tallulah shared. They both enriched one another’s lives and Carla’s gratitude was shown through the care and support she gave to Tallulah until the very end. 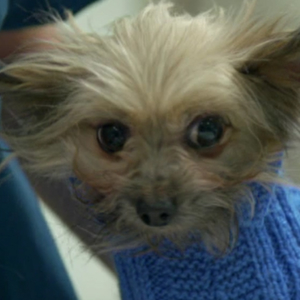 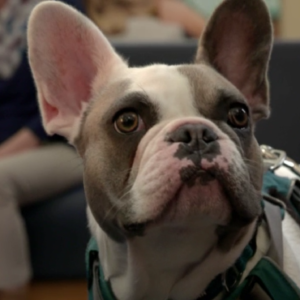