Doug the Pug lives an idyllic life in the countryside with student Aimee and her family, with their two horses, a cat and two other dogs. Doug is Aimee’s favourite, but she is worried that his walking has deteriorated over the past six months and he is now doubly incontinent. Aimee and mum Sarah come to see Fitzpatricks senior neurosurgeon Jeremy Rose to discuss what can be done for him. Jeremy says they need to perform emergency spinal surgery on Doug, during which he will cut into his spinal cord to remove a cyst. It’s a risky operation and Jeremy warns there is no way of predicting if Doug will recover, or that the operation will heal his incontinence.

Doug is the apple of Aimee’s eye and she dotes on him. The family live with a pack of animals from dogs to horses, but Doug and Aimee are inseparable.

For the last six months Doug has been increasingly unsteady on his feet and incontinent. Doug’s local vet had previously found a cyst on his spine, which they expected was causing the problems. Doug was referred to Neurologist Dr Jeremy Rose to further investigate what could be done for him. Jeremy explained that the signals travelling along the spinal cord from his hind legs to his brain and back again were being interrupted due to the cyst. The family had two options; operate with the hope that removing the cyst would enable the spinal cord to recover, or leave him how he was knowing that his problems would likely get worse over time. The family opted to have the surgery with Jeremy as Aimee wanted to do the best thing for Doug.

In surgery, Jeremy needed to locate the cyst, and then carefully break it down without damaging the vital nerves around the spine. The operation took over three hours of careful negotiation, but was concluded successfully. Now in recovery, only time would tell if the procedure would improve his walking and incontinence.

The next day, Jeremy went to check up on Doug and found that he was walking really nicely and making good progress. After a few days in hospital, Aimee and Sarah were able to take him home to continue his recovery.

Four weeks after spinal surgery, Aimee and Sarah brought Doug back to see Jeremy at Fitzpatricks. Jeremy was delighted at the progress he saw, marking positive changes to Doug’s use of his back legs. Doug was signed off and was a completely different dog as he was no longer incontinent and could run around happily. Whilst there remained a chance the cyst could return, Aimee is comforted knowing that they did the right thing for him at the right time and were able to give him a good quality of life. 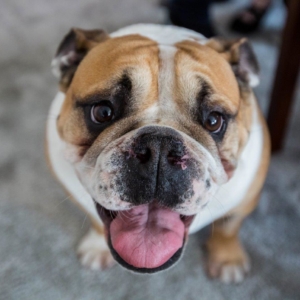